Homes for Sale in Isle of Wight

The largest community in Isle of Wight is Eagle Harbor. Located in Carrollton, just over the James River Bridge (JRB), this newer community consists mostly of large, single family homes, but does also include townhouses, condos, and apartments. Once past Eagle Harbor the population density gradually diminishes. As you travel west towards Windsor you'll quickly see the land change to farm and pasture. Smithfield boasts a quaint and beautiful downtown. Known internationally for Smithfield Ham, Smithfield Farms is a major employer in the area. While planned subdivisions certainly exist throughout the county, homes that offer a little more land and privacy are the norm.

Home To Be Built - Enjoy a luxury lifestyle in the beautiful golf course community at Cypress Creek. The "Stamford" plan offers a stunning Master Suite on the first floor...

Your dream home awaits you... walk in to your new home & enjoy the open floor plan with a spacious living room & large kitchen. Your new kitchen features new cabinets, an...

Spacious bungalow with 3 bedrooms, 2.5 baths is waiting just for you. There’s plenty of room for entertaining inside and outside of this home. As an added bonus, this hom...

14 ACRES WITH MANUFACTURE HOME * VALUE IS IN THE LAND BUT HOME IS IN EXCELLENT CONDITION-NOT ON PERMANANT FOUNDATION* PROPERTY BEING SOLD AS IS, LAND IS MOSTLY OPEN BOARD...

Welcome to 214 Red Point Drive with 2 bedrooms and 1 bath. You will enjoy hardwood floors throughout. Porch and deck space. Plenty of room for entertaining outdoors.

Home To Be Built - Enjoy a luxury lifestyle in the beautiful golf course community at Cypress Creek. The "Stamford" plan offers a stunning Master Suite on the first floor...

Eagle Harbor - If you are looking for a Low Maintenance Life Style... This is a MUST-SEE! Great Townhouse in great condition with primary suites on the first and second l...

Welcome home to this remarkable "HGTV" rancher in Moonefield Estates . Stunning upgrades have been done, all you have to do is move in. Nestled on /75 acres in a quiet cu...

WELCOME TO THE AUGUSTA, ANOTHER STUNNING HOME FROM SUFFOLK AND ISLE OF WIGHTS PREMIERE RURAL CUSTOM BUILDER. THIS FLOOR PLAN HAS IT ALL. FROM THE LARGE FRONT PORCH TO THE...

WELCOME TO THE EVERGREEN, A WONDERFUL FLOOR PLAN FROM SUFFOLK & ISLE OF WIGHTS PREMIER RURAL CUSTOM BUILDER. THIS HOME HAS A LARGE OPEN, FLOWING FLOOR PLAN, A BEAUTIFUL ...

This is a beautiful home w/ many updates. Remodeled kitchen and bathrooms, new master bath and bedroom suite addition on 1st floor, new roof, new deck on back of home wi...

BEAUTIFUL TRANQUILL SETTING * OPPORTUNITY TO BUILD YOUR DREAM HOME * PERFECT FOR NATURE LOVERS OR HUNTING * PLENTY OF DEER AND WILDLIFE * PARADISE AWAITS YOU * MUST SEE T...

BEAUTIFUL TRANQUILL SETTING * OPPORTUNITY TO BUILD YOUR DREAM HOME * PERFECT FOR NATURE LOVERS OR HUNTING * PLENTY OF DEER AND WILDLIFE * PARADISE AWAITS YOU * MUST SEE T...

BEAUTIFUL TRANQUIL SETTING * OPPORTUNITY TO BUILD YOUR DREAM HOME * PERFECT FOR NATURE LOVERS OR HUNTING * PLENTY OF DEER AND WILDLIFE * PARADISE AWAITS YOU * MUST SEE TO...

Check this one out first! This beautiful ranch home on over an acre lot features an open floor concept with stainless steel kitchen appliances, granite countertops and vi...

Come and get this one now! This beautiful 3BR 2.5 BA condo allows for peaceful living at its best. Home has lakes in front and in back and on a cul de sac that leads to a...

This property is a nice wooded lot with over 500' road frontage. Just minutes from Smithfield. Located in larger Lawnes Point subdivision.

Welcome home! This stunning condo features a bright open floor plan, with new carpet and fresh paint. Large kitchen with eat in area/bar open to the living room for easy ...

Calling all investors Great deal to fix and flip

Stunning home that shows like New Construction. Move in ready! The kitchen features espresso cabinets with granite countertops, gas appliances, and a huge island. The ent...

Bring your ideas and your business to this general commercial property on a busy road with great visibility. This .96 Acre parcel includes two buildings. First is a forme...

COME AND VACATION AT HOME! FISHING, SWIMMING, BOATING AND BEACHCOMBING RIGHT IN YOUR OWN BACKYARD! MAGNIFICENT VIEWS AND BREATHTAKING SUNRISES AND SUNSETS AWAIT. RELAX ON...

Welcome to your DREAM HOME! This grand all brick 3736 sq ft home is on almost 7 acres with lake frontage and dock. Oversized 3 car detached garage has heated/cooled FROG...

Welcome home to a beautiful home in a highly sought-after subdivision of Eagle Harbor. This home has a fantastic floor plan that is practical to entertain and is on a cul...

Nestled on over a quarter acre in the established neighborhood of Grimesland, this charming brick ranch home is conveniently located near Windsor Castle Park, downtown re...

BUYERS TAKE A LOOK AT THIS NEW HOME CONSTRUCTION! Come home and relax in your newly built home on .9 acres. Great home to entertain friends and family or enjoy evening di...

The Caroline is the perfect combination of style and space. Right off the 2-car garage, a convenient family entry is where you can drop your things. The gorgeous gourmet ...

Welcome Home! This lovely 3-bedroom 2.5-bathroom townhome is move-in ready. Enjoy your private back yard space with raised beds ready to plant the garden of your choice. ...

Available New Construction! Be ready for an Early Fall delivery in our new community at Church Square! The Clifton model is a paired home w/1350 sq ft of loving living sp...

Currently available new construction! Be ready for your Early Fall delivery in our new community at Church Square! The Bedford model is a paired home w/1397 sq ft of lovi...

Deep water front brick rancher with a basement on a quiet street with a pier and 12,000lb boatlift ready for you to enjoy in your back yard and watch the sunset. Bring yo...

Great opportunity for a hidden gem. All wooded lot in the Carrolton section of Isle of Wight. Towering timber adds to the unique nature of this tract. Nestled within the ...

One Level Living at its BEST! Come and enjoy life in Smithfield. You will love the bright, airy and tucked away feeling as you enter this spacious home. Carefree living ...

Beautiful Country Home Located on 4.25 Acres in Historic Smithfield! One Owner Brick Home Built by the Homeowner, who Owned his Own Construction Company. Lot can be Sub-d...

WELCOME HOME! This freshly painted/pressure washed home is nestled in a quiet cul-de-sac in the Holland Meadows neighborhood, just waiting for you & your family to come h...

Welcome home to this spacious 2 bedroom townhouse style condo. Walk in to your spacious living room with vaulted ceilings and an oversized window bringing in tons of natu...

Welcome to your new Custom built one-owner Home. This Home is in outstanding shape and has many unbelievable features, built on a private lot with Approx 1 acre with a vi...

This home is ready for a fast close. Situated in a cul-de-sac. Unwind on the welcoming front porch or the peaceful patio overlooking the private wooded lot. Inside, the ...

WOW!! This is a once in a lifetime opportunity for you to own this very rare and beautiful home located in the heart of Smithfield, VA! This amazing home is sitting on a...

You're sure to fall in love with this absolutely stunning home in Cypress Creek. Backing up to a wooded view of the 14th hole, you'll find a large, spacious home with a p...

Welcome Home to Moonefield Estates! You must see this charming cape cod style 3 bedroom, 2.5 bath home with an additional finished room over the garage near historic dow...

Fantastic Deal On This New Construction (To be Built) 3 Bedroom, 2 Bath Home On A Nice Large Acre Lot in Carrsville! Home Is Currently Under Construction. Located In the ...

Here's your opportunity to own in Eagle Harbor/Bridgewater condos in Carrollton! Condo association handles all exterior and ground maintenance, leaving you to just enjoy ...

This is a rare opportunity to own waterfront property on the Pagan River!! Located at the end of a Cul-de-Sac, this 2 acre lot has over 230FT of Deep-Water front. Lot is ...

Welcome to quiet country living! This 3 bedroom, 2 bath home is great for a first time buyer or anyone wanting to get away from the city life. With a little TLC & elbow g...

Ready to build your dream home? Need to dock your boat? Then this awesome lot in Smithfield is what you're looking for. The land is clear of trees and fronts the James R...

Office and/or Medical office space available in Smithfield. Come and join established businesses like Riverside, Pivot, and other local office/medical users. Nearby busin...

Country living in a Brick Ranch One owner home on 3.12 acres with 3BR, 2.5BA. Home as a newer roof, wood burning fireplace, concrete patio and storage shed. Home has lots...

Custom Built Home, with big wrap around front porch. First Floor Bedroom and Full Bath, 3rd floor Media Room that can be turned in In-Law suite. Located only 3 miles from...

This beautifully landscaped brick home sits on a large corner lot. The home has been extremely well maintained with upgrades to include granite countertops, stainless app...

WELCOME TO THE GARTHRIGHT, ANOTHER SPECTACULAR HOME FROM SUFFOLK & ISLE OF WIGHTS PREMIER RURAL CUSTOM BUILDER. THIS SPRAWLING RANCH HOME HAS IT ALL AND THEN SOME. LARG...

WELCOME TO THE EVERGREEN, A WONDERFUL FLOOR PLAN FROM SUFFOLK & ISLE OF WIGHTS PREMIER RURAL CUSTOM BUILDER. THIS HOME HAS A LARGE OPEN, FLOWING FLOOR PLAN, A BEAUTIFUL ...

Take advantage of this great and unique opportunity to build your dream home on this private beach oasis!! These are the last 2 waterfront lots in the Riverfront Communi...

Take advantage of this great and unique opportunity to build your dream home on this private beach oasis!! These are the last 2 waterfront lots in the Riverfront Communi...

Come see this beautifully maintained home on the Championship Curtis Strange golf course. New flooring and paint throughout! This home boasts 5 bedrooms and a theater roo...

Just what you have been looking for! Private 3 bedroom brick ranch on just under 1 acre lot. Move in ready, cozy up to the fireplace on a cold night with wood stove inser...

Deep water access on over 2 acres on Lawnes Neck. Come see this one first and build you dream home over looking the James River views. Privacy in a neighborhood conveni...

Beautiful 5-acre wooded lot sits across the properties along the James River in a beautiful, private and secluded community of the Lawnes Point on the James. Take in the ...

This home has so many extra features designed by the sellers! The inside is beautiful with hardwood floors throughout, tiled very large handicap accessible bathroom in th...

You won't be able to wait to get home to sit on the back deck every evening to enjoy drinking your evening cocktail, watching the sunset. You might see an osprey, bald ea...

**$5,000 TOWARDS BUYER'S UPDATES OR CLOSING FEES**Welcome to Gatling Pointe in the desired area of Smithfield! Available Yacht Club membership for boating, swimming, and ...

PRICE NEGOTIABLE - THIS IS YOUR CHANCE TO OWN A COUNTRY STORE IN A SMALL COMMUNITY ABOUT 15 MINUTES FROM THE TOWN OF SMITHFIELD - ONE SIDE OF THE BUILDING CAN BE USED FOR... 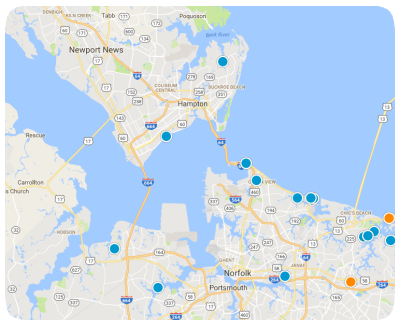